Benefits of Listening to the Qur'an Reading You Need to Know

Infodasar.com-Quran is a major source of guidance for Muslims, a book that contains divine knowledge and complete instructions for the guidance and guidelines of Muslims. Therefore, for a Muslim, there is no book that is more holy than the Koran and the rules contained therein stand on all other rules concerning worldly books. 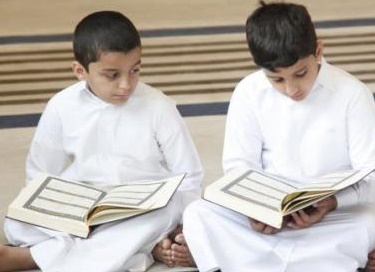 Besides the fact that the Quran is rich in knowledge, the Quran also brings benefits and religious appreciation for a Muslim. These rewards are countless and both listening and reading of the Qur'an give rewards and benefits to a Muslim. Therefore, it is a natural practice in Muslim households to read and listen to the recitation of the Qur'an every day. The explanation below relates to the benefits that a Muslim receives by listening to the Qur'anic reading.
Before switching to the benefit of listening to the Quran for a Muslim, it is important for a Muslim to understand and know the true essence of the Koran. In the Qur'an, Allah says:

From this verse, it is obvious that the benefits of the Quran depends on the person reading or read it. Those who believe, for those Quran, is healing and mercy, while for those who do not believe in the holistic message of Islam, for that Quran is nothing but a disadvantage. Therefore, every time it deals with the Koran, it is imperative that a Muslim has the purest and pure intentions.


Benefits of Listening to Qur'anic Readings

Switching to the benefits of listening to the recitation of the Quran, the main benefits are as follows:


The first and most important benefit of the Koran for someone listening to it is that it serves as a reminder. A reminder for everything that must be reminded and conveyed to a Muslim in connection with its purpose in life and the way it needs to be done. In the Qur'an, Allah says:

"There is indeed a reminder in this for anyone who has a heart, or who listens attentively to the presence of the mind." (50:37)

From this verse, it is clear that the Koran is an open and clear reminder for those who listen attentively to the presence of the mind. When a person listens to verses attentively, only those verses leave their impressions on the mind and under that impression a Muslim develops a sense of fear, love, respect, and a sense of obedience and submission to Allah SWT. In addition, listening to the attentive Al-Quran is what reminds a Muslim of this temporary nature of the world and how there will be living in the hereafter who needs to be prepared a Muslim. Therefore, listening to the Quran on a daily basis serves as a reminder for a Muslim.


The second benefit of listening to the Quran that befalls a Muslim is the mercy and blessing of Allah SWT. In the Qur'an says:

"When the Qur'an reads, listen attentively, and be silent, so that you can be blessed with mercy. " (7:204)

From the verses of the Qur'an, it is clear that the people who listen to the Quran with attention and by observing the silence are those who accept the blessings and mercy of Allah SWT. Therefore, whenever a Muslim finds the recitation of the Quran, he must remain silent and try to hear him attentively so that he can come under the umbrella of blessings and mercy of the Almighty.


Above all the biggest single benefit of listening to the recitation of the Quran with attention is the guidance that someone receives from it. Although the Quran in Arabic and to understand it properly one must learn Arabic Quran, however, when someone who only knows to read or read Arabic, when he listens to the Quran is likely that the words will Leave the former on the heart of the person and after that the person can go to find the meaning of the words and verses for understanding and guidance.

In the Qur'an, Allah SWT says:

"Those who shun evil and do not fall into his worship and return to God (in repentance) for them are good news: announce the good news to Hamba-hambaKu those who listen to the word, and follow the best (meaning) in Therein: They are the ones whom God has guided, and those who have understanding.  "(39:17-18)

From this verse of the Koran, it is clear that one needs to listen to the Quran and then from listening to people need to conclude the best meaning of it. When the person concludes the best meaning from him, the final guideline will come from Allah SWT to help listeners understand the message of the Quran.

In short, listen to the recitation of the Quran with attention serves as a reminder, bringing close to the blessings and grace of God and making someone open to understanding and guidance. Therefore, every time a Muslim listens to the Quran, he must listen to him attentively.