When Islam adheres to psychology and is made an academic study and discipline, you begin to question how long the Muslim community may ignore mental health, impacts, causes, and the path to recovery? Some people may say that it is part of everyday life and should only be "done", some might say that the difficulty must remain between you and your relationship with God, others may say The classic influence is a genie, while others may say  "This is something new, and has never been considered before". 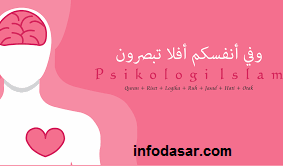 Islamic psychology is a study of the "Self " or "soul" of the Islamic perspective with a different concept to the West which is to examine the unseen things, the influence of destiny, the temptation of Satan and the influx of souls. Islamic Psychology also discusses topics in psychology with Islamic teachings, history, values and ideas as a basis such as neuroscience, philosophy of Mind, psychiatry, medicine, and therapy.
Psychology is interpreted as a scientific study of the human mind, its functions and patterns, namely the process and perception of mind how it affects the behavior or influence of certain characters on behavior and in general, the mental state of mind.

The history of psychology begins with the ancient Greeks, but what the scholars of the Middle East then brought to the homes of knowledge and their wisdom that formed the psychology that would later affect Europe when he experienced the revival First. Like the Greeks, scholars had no term for "psychology" and did not classify themselves as psychologists; Instead, they approach it in a practical way that seeks ways to heal, heal and balance the body rather than just theorizing. While many Muslim scholars contribute to the study of Islamic Psychology, other works are lost in movement and time, there are some names that should be noted due to its significance for Islamic Psychology today.
Ibn Sina or commonly called Avicenna which proposes that humans have 7 inner senses that compliment the outer senses: common sense, imagination retention, the imagination of animal and human composite, power estimation, memory, and processing. All of which essentially underpins the general material used to teach Psychology Today and its propose has also become a reference point for many to pursue it that has studied certain aspects individually. His psychologic led him to develop fears, surprises, and music therapies that put belief-"mental illness caused by demons or possessed", silent (see how backward we Are?). He remained faithful to Greek ideas about internal balance but pushed further by saying trust is one component that can affect all aspects of the body. He suggests saying that if someone believes that he can be better, his physical illness will be defeated, on the contrary, a healthy person can become sick, if they believe they will become sick. It adds somatic/psychosomatic diseases/disorders to the psychology dictionary.
We have great people such as Muhammad Zakariyah or more famous with the call Ar-Razi that contributes too much in the field of science, but his observations about the human mind are very interesting. He made a statement about the human emotional condition and made suggestions for their care, with a focus on nutrition and food. He also made an excellent observation about the use of conditional therapy, centuries before the 20th-century behavioral psychologists.

Other notable people include Al-Ghazali who may lay the groundwork for prominent child psychologists such as Piaget and the concepts of associations, learning, and conditions for behaviorists such as Pavlov and John Watson. Al-Ghazali was one of the first to introduce the nature of the ego-centrism of children since birth and the idea of fear taught or learned from experience. As a Sufi, he strongly believes that self-observation and self-analysis are key to understanding mental illness and discovering hidden sources of internal problems. From this, we can't help but wonder the extent to which his ideas affect the idea of self-assessment in today's practice. He also brings to the world the idea of psychology needs, and proposes that the human personality has the urge and desire that needs to be fulfilled for optimal functioning – although his version is categorized sharper compared to those like  " The hierarchy of needs  "Maslow, the model does provide significant guidelines for grouping needs or mental desires. There is also Ibn Khaldun who will be portrayed as a behavioral expert today when he proposes that personality is formed by an individual environment and environment. The view acts as a guide to ideas such as the debate of nature vs. Nurture and experimental reasons for biologists and behavioral supporters. The works of Najib Uddin Muhammad found very detailed about many mental disorders such as depression, paranoia, sexual dysfunction among many others and his observation approach certainly affects many other scholars in the field at the time, but also many psychologists emerged later.
During this time, Islam flourished and many people would describe the years from 750 M – 1258 A.D. as the Golden Age of Islam. After the Abbasids were established and Baghdad became their capital, the strengthening of power and the expansion of their empire meant accumulated knowledge, especially in the sciences.
From astronomy to mathematics, but medicine and health always remain a top priority because of the importance of keeping people around you and yourself as Muslims. As we all know, it is important to not only keep the spiritual health of others by letting them pray prayers where and whenever they want, not to bother them from their Quran, and forever pushing to advance in Islamic and Arabic knowledge, etc, but we also have to maintain the physical and mental health of each. This ranged from simply moving the obstacles from the track to providing good and adequate food for the guests to visiting the sick, all of which can be attributed to the hadith which means:

"Not perfect one's faith so he loves his brother as he loves himself. " (Narrated by Al-Bukhaari & Muslim)