History of Qur'anic Punctuation to Know 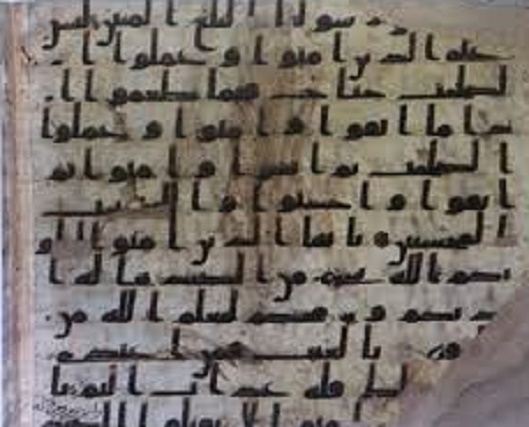 The lines of Fathah, Kasrah, Dhommah, and breadfruit, form, and Point, comma (punctuation marks) are not available. Obviously, it is still easier to read Arabic writings in the bare yellow books or books without lines because Muslims can still know the the letters based on their form and punctuation. For example, the letter Ta, TSA, BA, nun, Syin, sin, shad, tho ', and so on though can not know the meaning.
Fortunately, these concerns are quickly resolved until Muslims around the world can know and more easily read the Koran. All of them are evident in the role of the Companions of the Apostle, Tabin, and Health.

During the reign of the Umayyad dynasty, the Qur'anic punctuation has begun to be given as a point and line.  For 40 years Muslims read the Koran without punctuation or syakal. It is in three phases.


At that point, Muawiyah gave a duty to Abdul Aswad Ad-dawly to place a punctuation (i'rab) when each sentence in the form of dots to avoid misreading.


This fifth Umayyad Caliph commissioned one of the governors during the time, Al Hajjaj ibn Yusuf, to give the point as a differentiator between one letter and another. For example, the letter Ba ' with one point below, the letter Ta with two dots above, as well as the TSA with the three dots above. During this time, Al Hajjaj asked for help when Nashr ibn ' Ashim and Hay bin Ya'mar. During the time of Caliph Abdul Malik bin Marwan, the state of Islamic rule had become wider to Europe. Because of the concerns of the Qur'an recitation Asertaya for Muslims who are not Arabic-speaking, instructed to write the Qur'an with the addition of the punctuation. The goal is to ascertain the uniformity of Qur'anic readings for Muslims who are Arab or non-Arab descent (' Ajami).


The Koran is given punctuation of Dhamah, Fathah, Kasrah, and breadfruit to beautify and embellish Muslims in reading the Koran. The Koran reading is still following the example of a punctuation that has been done by Khalil bin Ahmad Al Farahidy, who was an Arabic language encyclopedia that was then very famous. Based on history, Khalil bin Ahmad also gave the sign of Hamzah, Tasydid, and Ismam when the sentences contained in the Koran.

Furthermore, the scholars stated to facilitate the reading of the Koran during the time of the Caliph Almakmun, especially for people other than Arabs, by creating the recitation of the tajwid signs Isymam, rum, and mad. They also make rounded circle marks as paragraph separators and include paragraph numbers, Waqf signs or stop reading signs, Ibtida (initiating reading), describing the identity of the surah at the beginning of each surah consisting of the name, place descending, number of Paragraphs, and the number of ' Ain.

The other signs that were made when the Qur'an was written are Tajzi ', which is a dividing mark between one Juz and the other, the word ' Juz ' and followed by numbering and a sign to show the contents of a quarter, one fifth, One-tenth, half-juz, and the juz themselves.

With the Asertaya signs, now Muslims all over the world, regardless of the race and color of the skin and its language, they are easy to read the Koran. This is all thanks to the role of the above figures in bringing the people to the better, especially in reading the Koran.