Islamic Law On Celebrating Valentine's Day For a Muslim

Many people celebrate Valentine's Day which falls on the fourteenth of February each year they do so by swapping red roses and gifts. They also wore red clothes and congratulated each other. 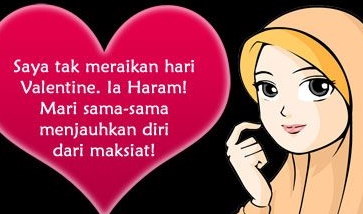 The rules regarding Islamic law on celebrating the day of Valentin that falls on February 14th each year are described as follows:

The explanation is clear from the Quran and Sunnah, and this is agreed by the early Muslim generation that confirms that there are only two holidays in Islam, namely Al-Fitri (after the fasting of Ramadan) and Al-Adha (after standing in ' Arafah for Hajj).

Any other feast day, whether related to a person, group, event or other matters that constitute a created for the day not permitted for Muslims to participate in it, approve it, demonstrate happiness in Chance, or help others to do so, in any way. Doing so means breaking boundaries.

Meaning:  "... Whoever transcends God's boundaries must have made a mistake against himself...  "(Quran: 65:1)

If we add the day of Valentin as a feast, then, in fact, we have followed the feast of the feasts of people other than Islam. Thus, if this happens we belong to the people in their own means. As explained by the Prophet Muhammad. Hadith of the Prophet:  "Man Tasyabbaha Bikaumin Fahua Minhum ".

It is called because its celebration demands imitations of the heathen and thus show them a form of faithfulness. In the Qur'an, Allah expressly forbids believers to emulate, love, or be faithful to unbelievers, in any way.

Therefore, it is not permissible for every Muslim who confesses to believe in God and the last day to participate in it, approve it, or congratulate anyone on that occasion. In addition, it is mandatory to abandon it and refrain from it as obedience to the commandments of God and his apostle.

In addition, it is forbidden for a Muslim to assist or assist Valentin's holidays or other prohibited celebrations in any way either by eating or drinking, selling or buying, producing, providing gifts, correspondence, announcements, or Other. All these things are considered to cooperate in sin and transgression and disobedience to God and His messenger. The highest and most High God is in firmness which means:  "... And cooperate in truth and righteousness, but do not cooperate in sin and transgression. And fear Allah is very heavy in punishment.  "(Quran: 5:2)

Also, it is mandatory for every Muslim to strictly obey the Qur'an and Sunnah in every situation and at all times, especially in moments of temptation and corruption. It is the obligation that he understands, is conscious and careful not to fall into the deviation of those who are angry with God (i.e., the Jews) and those who are lost (i.e., the Christians) and other immoral people who have no fear of punishment or hope of gift from God, and that does not give recognition at all to Islam.

It is important for Muslims to always laugh at the highest God, to fulfill his guidance in the right way. There is indeed no guide except God, and no one can give a firmness other than God, and success is of him.