Infodasar.com-Islam is one of the last religious religions of mankind. But specifically Islam is the name of religion that has the belief in Allah and the Prophet Muhammad saw as Nabinya and Koran as his holy book. Then, what is the meaning of Islam as a term other than religious identity? 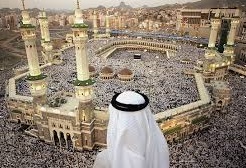 Islam is a word with many connotations. The word Islam derives from the Arabic language which carries the meaning of peace and submission (to Allah SWT and Almighty). Ibrahim's all religions were handed down to discipline mankind and prepare them spiritually, physically, and intellectually in the best way to fulfill the mission they created. God's message is intended to build a worthy human being to build civilization and create prosperity in the world. For this purpose, God commands us to do what is beneficial to us and forbid all that harm us.

Ibrahim's religions were revealed to liberate the human mind and make it enlightened and mature through divine light. Religion is not meant to be contrasted with reason and truth. Instead, it is meant to be aligned with reason and help develop and illuminate it. If the nations of the world truly hope to achieve world peace, the only way left for them is to embrace God's message based on establishing peace between man and God, and man with man.

The glorious Qur'an illustrates our prophet Muhammad, namely:  "We do not send you, but as a mercy to the world." (Sura Al-Anbiya ': 107)

Allah Almighty says in his glorious Qur'an: "Allah invites to the place of peace... " (Epistle to Jonah: 25.

Islam sets a greeting for peace for its lord as a Prayer of peace and mercy to be exchanged every time they meet.

In fact, Islam was not handed down to cancel God's previous message but to renew and refine it. Therefore, the Prophet Muhammad said: "My parable compared to other prophets before I was a man who had built a house beautifully and beautifully, except the place of a brick in the corner. The people surround him and wonder in his beauty, but say: "Is this brick put in place?" So I was the last (final) of the prophets.  "(Reported by Al-Bukhari (3342) and Muslim 22-(2286) on the authority of Abu Hurayrah (RA with him).

Allah SWT says in the Koran:  "say: We believe in God and what has been revealed to us, and what is revealed to Abraham and Ismail and Isaac and Isaac and Jacob. And the Tribes, and (in) what was given to Moses and Jesus, and (in) what was given to the prophets of their lord, we did not make a difference among them, and to him we are subject. "(Sura Al-Baqarah: 136).

In this case, the Prophet Muhammad saw also said: "I have the best claim for ' Isa, son of Mariam, among all mankind in worldly life and later life. Prophets are brethren, have different mothers. Their religion is one but their mothers are different. "Narrated by Al-Bukhaari and Muslim on Abu Hurayrah's authority (Sahih Bukhari (3259) and Muslim Sahih 143-(2365)).

Thus, the Prophet Isa A. S was not sent to eliminate the message of the U.S. prophet Moses so also the Prophet Muhammad was condemned by God not to remove the teachings of the U.S. prophet Isa instead, each prophet was sent to confirm the message of his predecessor and Paving the way for his successor. The glorious Qur'an is the source that gathers the essence and wisdom of all previous divine messages.